This Roasted Duck Sweet Potato Ravioli is served with a Sage Cream Sauce for a sophisticated, fall pasta dish that’s sure to impress! 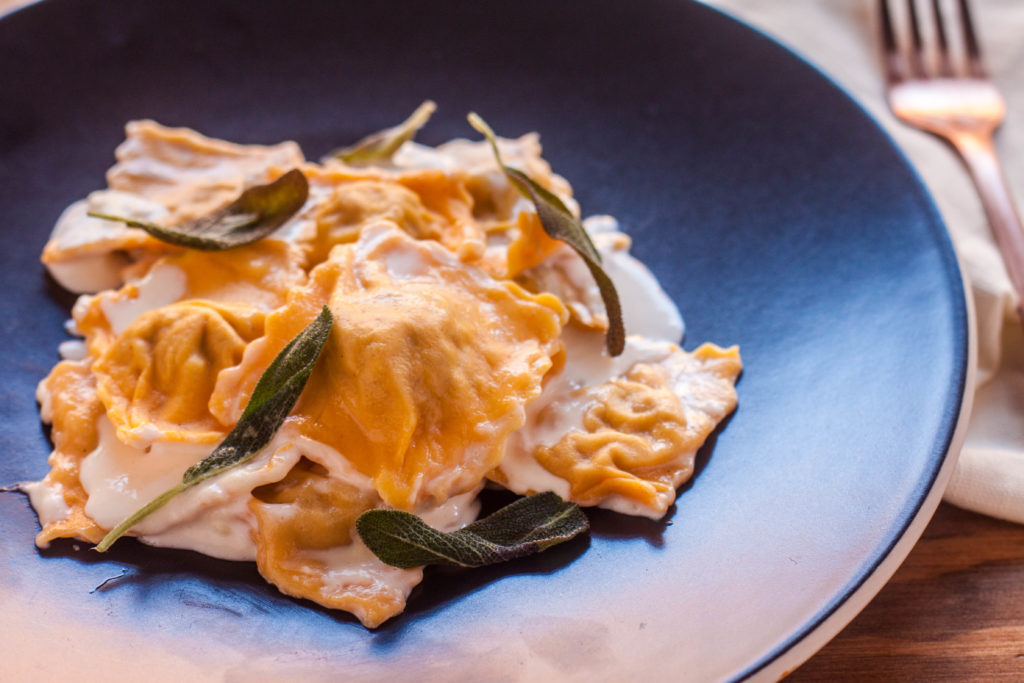 Admittedly, I am much more of a summer person than any other season. It’s hard for me to get into the fall spirit of things. Maybe it’s because I’m not a huge pumpkin fan. Gasp! I know. But, I am very much a sweet potato fan, and that totally counts as a fall food, right? Right!

I love how simple this Roasted Duck Sweet Potato Ravioli dish is, but how complex the flavors work together. Duck has such a pronounced and very identifiable taste to it. A lot of people complain that duck is a very oily meat. And it is…when it’s not cooked properly. Duck is a naturally fatty animal because they need an extra layer to keep themselves warm in the water. The way to combat the extra fat is by rendering it completely. When I finished roasting my duck legs, the amount of fat in my cast iron skillet tripled! The result was a non-greasy, delicious duck filling for the ravioli. 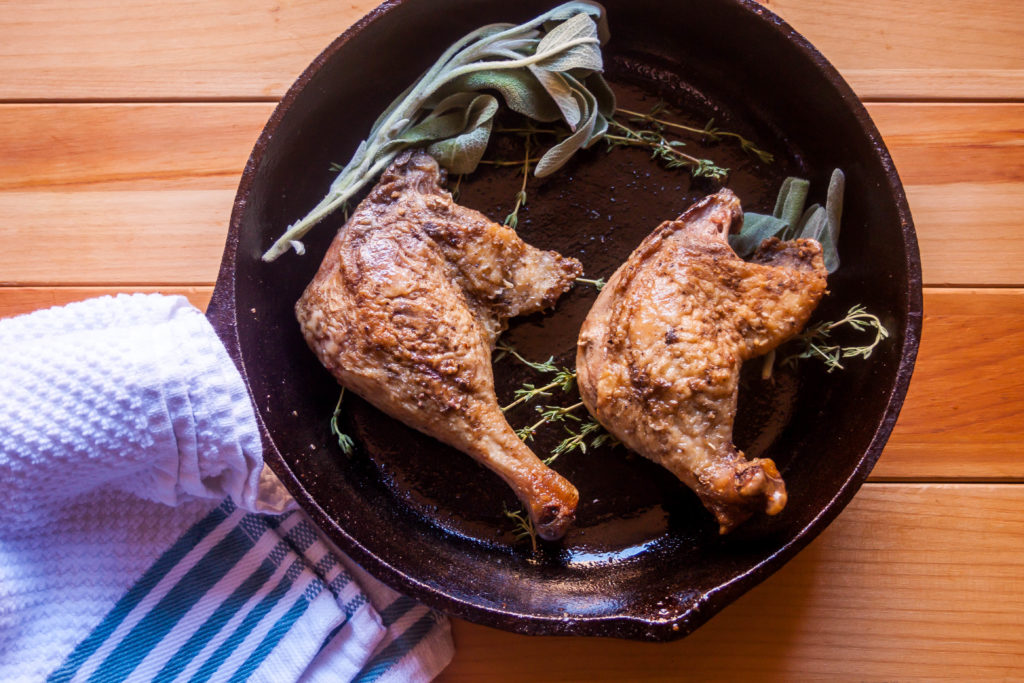 I love making pasta from scratch. There is a very notable difference not only in texture, but taste as well. Going through that extra effort of making your own ravioli dough, though time consuming, is well worth it in the long run. If you would like to read my secrets to making amazing ravioli from home, this post is definitely worth your read.

Making plain pasta dough is one thing, making flavored pasta dough is a whole new ball game. You have to take into consideration the added moisture of the element you’re flavoring your pasta with. While sweet potatoes are not as wet as tomatoes, they still have moisture in and of themselves. In order to combat the extra moisture, I roast them in the oven on a bed of salt and herbs. This achieves two things: 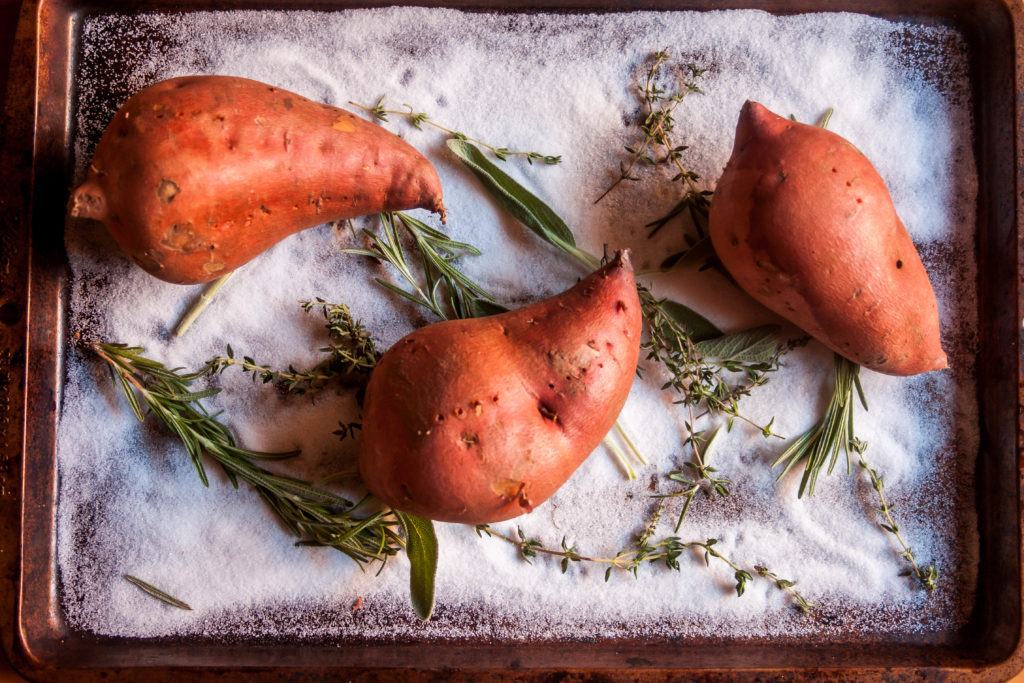 The result of baking your potatoes like this is that you get rid of a lot of the moisture in the potatoes and you set yourself up for an awesome tasting pasta dough. I do the same thing for my homemade gnocchi as well.

Keep in mind, when making your raviolis, the size of the filling. Depending on how big of raviolis you’re making, I would use anywhere from 1/4 teaspoon to one teaspoon of filling. Even though those numbers don’t seem big enough, it really is when you start laying out the filling on the rolled dough. 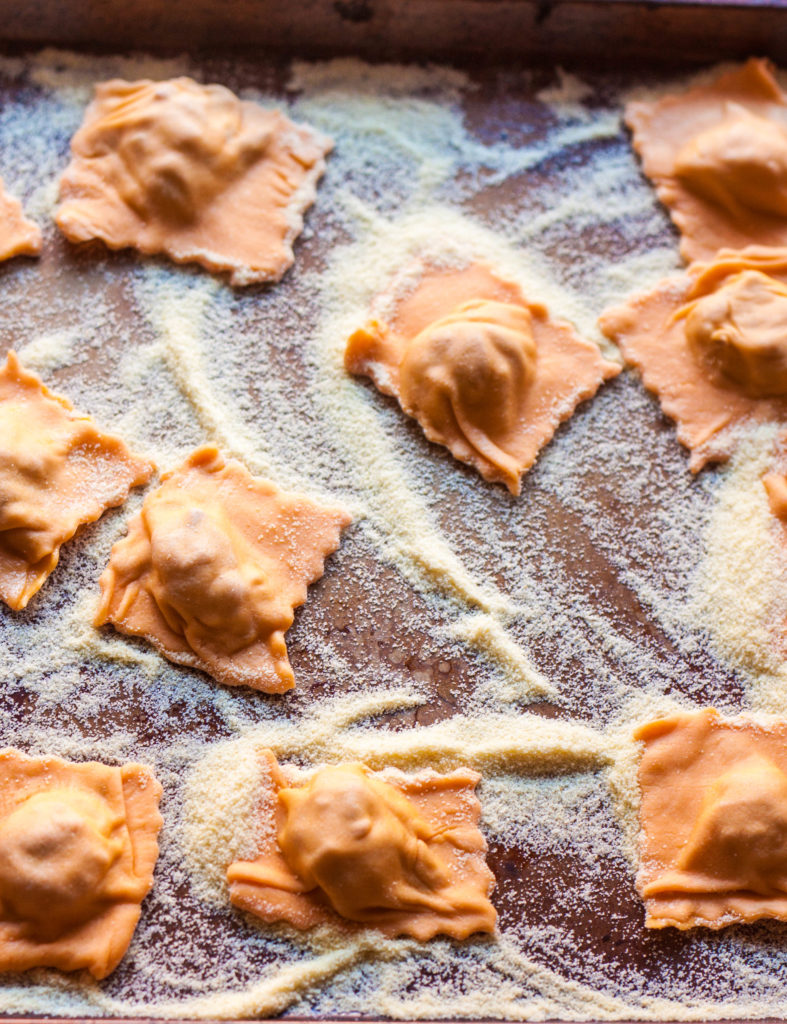 As for the Sage Cream Sauce, nothing could be easier than infusing cream with sage. Sage is such a pungent herb that it releases its fragrance very easily! Adding a touch of marscapone cheese to the sauce gives it body and thickness.

Enjoy this fun fall pasta dish; it’s sure to impress anyone lucky enough to eat it! 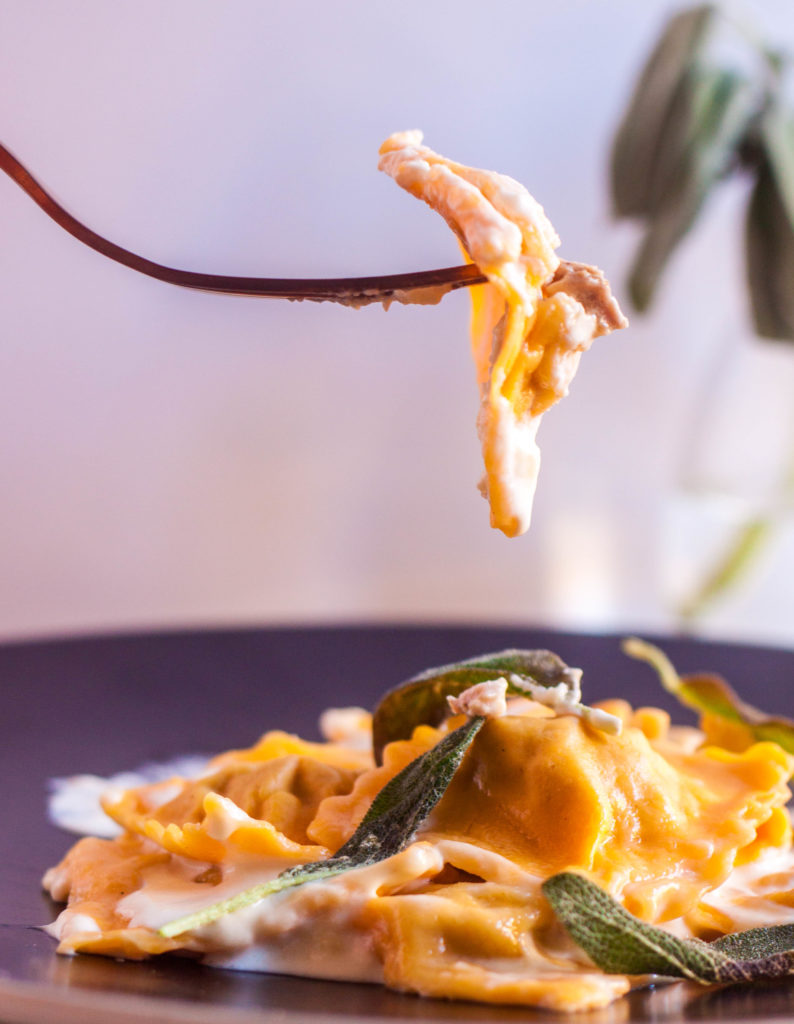 Home Chef Tip: If you are not using a mixer to make the pasta dough, pass the sweet potatoes through a ricer or fine mesh strainer, then mix potatoes, semolina flour, and egg together.

We hope you love this Roasted Duck Sweet Potato Ravioli recipe from SoFabFood Home Chef, Marlee from I Just Make Sandwiches, as much as we do. If you enjoyed this delightful recipe, be sure to stop by our Dinner Section to find more like it. For daily recipe inspiration,  subscribe to our newsletter, like us on Facebook, and follow us Pinterest. Enjoy!