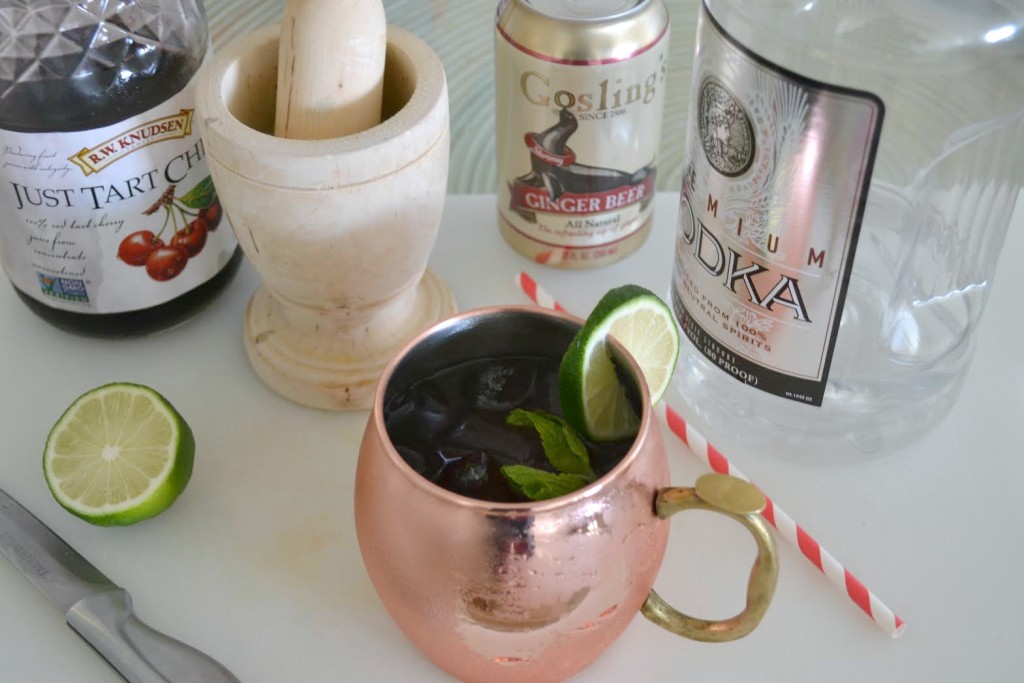 A Moscow Mule, also known as a Vodka Buck, is a refreshing drink on a warm spring night. The Moscow Mule Cocktail is a vodka-based cocktail with ginger beer and topped with a wedge of lime. We posted our Traditional Moscow Mule Recipe last month, and now we are bringing you another version with the added flavors of tart cherry juice and mint. This cocktail pairs perfectly with grilled dishes and Mexican cuisine.

Here’s a little bit of fun history behind the Moscow Mule. It is rumored that Vodka was relatively unknown and highly disliked outside of Russia and Central Europe in the years following World War II. In a leap of faith, a man named John G. Martin bought the U.S. rights to the French Smirnoff brand in 1939, but quickly discovered that no one in the U.S. was buying the stuff. One somber afternoon, Martin was regretfully discussing his inability to sell his vodka at the L.A. bar, Cock ‘n’ Bull, with the owner, Jack Morgan. Morgan was having a similar problem, but with ginger beer. There was another hard-up businessman present that day who had an abundance of copper mugs he couldn’t move either. So, with a few drinks under their belts, a little bit of ingenuity, and a bartender on hand, they combined their problems and the Moscow Mule was invented.

We hope you love this Cherry and Mint Moscow Mule as much as we do. If you love this refreshing cocktail recipe, be sure to visit our Drinks Section for more like it. For daily recipe inspiration, like us on Facebook, follow us on Pinterest, and stop by our Google+ Community to see all of the amazing recipes our community members are sharing. Enjoy!

Disclosure: Messaging above is intended for ages 21+ and is intended to be enjoyed responsibly, in moderation.

How To Make a Moscow Mule Recipe

How to Make a Coconut Water Vodka Cocktail

The Morgan Mule with Captain Morgan®

April Decheine is the creator of Skinny Over 40 which is a blog about living a healthy lifestyle over 40, and Island Boy and Girl which she co-writes with her husband about living the Island life on Marco Island.